Guide to LDAP for System Administrators

Our guide to LDAP is intended to save you time, make you more productive, and remove some of the frustrations that LDAP tends to create.

A Guide to LDAP for System Administrators

This guide to LDAP primarily serves as an introduction. If you are just starting out, this guide to LDAP should be just what you are looking for. Well, we hope it is. However, you may still find our guide to LDAP useful even if you think you know all there is to know about LDAP!

LDAP is a protocol for accessing information directories. It is used in e-mail programs and web browsers to allow lookup queries to be run. LDAP is also used by Active Directory, and if you run a large website, it can be useful to use LDAP for authentication. LDAP is also used for management systems. The main advantage of LDAP is it is quick and has been developed for high speed reads.

Forget about SQL for access. LDAP doesn’t use it. Instead ldapmodify and ldapsearch commands are used. LDAP also uses different search criteria, something referred to as Polish notation.

For example, you could perform a lookup:

That search would be used to find all individuals with a common name (cn) of Holmes, who are living in (st) 122b Baker Street.

Common name is used for the main attribute of the search and will locate the record. LDAP also uses Uid.

You must include the operator & (AND) which will connect the two criteria. A “|” (pipe) is OR in Polish notation.

However, it is much simpler to perform searches if you don’t use Polish notation. 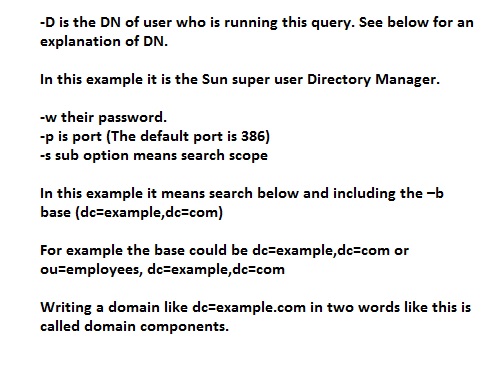 In the above example, the search criteria used would be cn=Holmes, and the attributes to return are detailed in the last three fields (cn uid st)

The DN should be familiar to you as it is the same as that used in an SSL certificate. Using our example, the LDAP record would look like this:

Pay attention to the objectclass attribute. This is just like a table schema. Each objectclass is used for a different additional attribute, which could be any number of fields such as telephone number, assigned mysteries, etc. etc.

If you want to check the LDAP schema, you can query cn=schema

The DN or domain name is the first line in an LDAP record. It will tell you the exact address in the Directory Tree (DIT).  This will tell you which organizational unit (ou) the record belongs to.

The records can belong to groups, in this case the group is “detectives.”

You will find that some LDAP servers will list groups in two ways. For example, Novell eDirectory will list the members of the group on the group record, and the individual groups that each user is a member of on the user record. The attribute “MemberOf” is used in this regard.

LDAP servers have LDAP records stored in native format. LDIF (LDAP interchange format) is used to add and delete records. To delete a record, we would use the following (Note the second line of the record is the operation.)

And to add a record…

If you are conducting a round robin operation, and your configuration has the web server looking at a number of different LDAP servers, an error condition may be caused.

A situation could arise where someone signs up for a website and is prevented from logging on. This is because it could take time for a user to be added on a record on one LDAP server and for that entry to be replicated on a second LDAP server.

Ldapsearch commands are used to monitor replication. For example, if you use Oracle, you would conduct a search using cn=replica

It is important to use as large a cache as possible if you have a high capacity, high volume LDAP server. That said, make sure you know the available memory on the machine. If you have sufficient memory, it should be possible to cache the full LDAP database. By doing this you will be able to reduce seek time for search operations.

As a system administrator you are likely to have to spend a considerable amount of your time resetting user passwords. This is one of the main ways you can determine if it is a user error that is preventing an individual from being able to login, or whether the problem is something more serious.

If possible, set up your website so the user can reset their own password. If not, use the Sun LDAP or Active Directory graphical interface to reset passwords.

Since you have much better uses of your time than resetting user passwords, if you find that a big chunk of your day is spent resetting passwords, try this…

Save an LDIF file and use ldapmodify against it to change the uid of the user. This will save you quite a bit of time, plus it is easier than using the graphical interface! 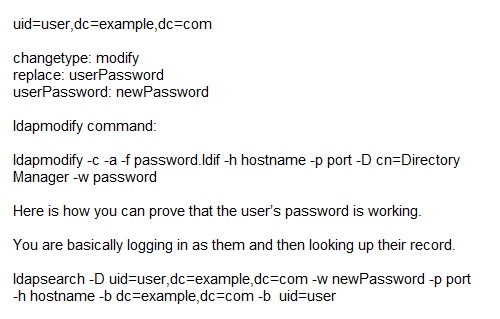 Recipient verification and sender authentication are essential if you want to maintain secure email flow.

A large proportion of spam email – and malware contained in those emails – can be blocked once you have identified trusted senders.

SpamTitan can be configured to ‘synchronize’ with your LDAP server, and by doing so, will create accounts for domain users automatically.

Bear in mind that ArcTitan can be used to archive LDAP records. We hope that you never have a need for disaster recovery, but if you do, recovery is easy as your LDIF records will be kept in the same permanent storage.

New US Cybersecurity Legislation to Be Proposed

President Barack Obama is set to propose new US cybersecurity legislation this week in an effort to tackle the growing problem of cybercrime. Recent high profile hacks on government organizations have caused considerable embarrassment and there is growing concern that the US government is losing the war on cybercrime and that it can do little to prevent attacks from foreign-government backed hacking groups.

New US cybersecurity legislation is seen as the answer to the government’s inability to prevent cyberattacks. Further intel is required, new powers needed to pursue criminals, and also to take action over criminal activity that takes place outside its borders.

Currently private companies are unwilling to share cyberthreat intel with the government, and improved collaboration and intel sharing with the private sector is seen as critical in the fight against cybercrime.

The proposed US cybersecurity legislation would make it much easier for the courts to take action to shut down criminal botnets and would discourage the sale of spyware. It will also expand the current Racketeering Influenced and Corrupt Organizations Act. This would give the government greater power to prosecute individuals engaged in cybercriminal activity, such as the selling or renting of botnets. It would also increase the government’s power to prosecute for the selling of government information outside US geographical boundaries.

The new US cybersecurity legislation is being pushed through in the wake of a particularly embarrassing hack of the U.S. Central Command’s Twitter account. Hackers managed to gain access to the Twitter account and post pro-ISIS content. Action was already being planned following a host of major cybersecurity incidents such as the attack on Sony, which has been attributed to a hacking team backed by North Korea. The Twitter hack was last straw for many, and will be used to help push through the new legislative package.

In the words of President Obama, the attacks “show how much more work we need to do, both public and private sector, to strengthen our cybersecurity.”

Private companies will be forced to share their cyberthreat intelligence with the government, although they will receive “targeted liability protection.” Even president Obama admitted to not knowing exactly what that meant.

The problem with sharing intelligence data is the threat of subsequent lawsuits. The liability protection is supposed to relieve any fears of legal action for the disclosure of information, although private companies may require more convincing.

Under the current proposals, private companies would be permitted to remove information about individuals before sharing data. Previous attempts to introduce new US cybersecurity legislation have failed due to the unwillingness of private companies to leave themselves wide open to litigation.

Part of the new legislative package is likely to include a new data breach notification law that would require all organizations to report hacking incidents to the government as well as requiring them to provide further information about cybersecurity breaches and data theft to consumers.

While few would argue that new US cybersecurity legislation is required, many privacy proponents are uncomfortable with the wording being used in the proposed legislative package, which they claim is intentionally vague.