In all likelihood, 2016 will be forever remembered as The Year of Ransomware, in the same way that 2014 was the year of the healthcare data breach.

2016 Will be Remembered as The Year of Ransomware

Ransomware first appeared in the late 1980’s, although at the time, cybercriminals did not fully embrace it. Instead, they favored viruses, worms, and other forms of malware. That’s not to say that ransomware was not used, only that there were more lucrative ways for cybercriminals to make money.

That all started to change in 2015, when the popularity of cryptomalware was fully realized. By 2016, many actors had got in on the act and the number of ransomware variants started to soar, as did attacks on healthcare providers, educational institutions, government departments, businesses, and even law enforcement agencies. In 2016, it appeared that no one was immune to attack. Many organizations were simply not prepared to deal with the threat.

Early in the year it became clear that healthcare organizations were starting to be targeted for the first time. In February, one of the most notable ransomware attacks of the year occurred. Hollywood Presbyterian Medical Center in Hollywood, CA., was attacked and its computers were taken out of action for well over a week while the medical center grappled with the infection. The decision was taken to pay the ransom demand of $17,000 to obtain the key to decrypt its data.

Not long afterwards, MedStar Health suffered a massive infection involving many of the computers used by the hospital system. In that case, the $19,000 ransom was not paid. Instead, encrypted data were recovered from backups, although the disruption caused was considerable. 10 hospitals and more than 250 outpatient centers had their computers shut down as a result of the infection and many operations and appointments had to be cancelled.

In the first quarter of 2016 alone, the FBI reported that more than $206 million in ransom payments had been made by companies and organizations in the United States. To put that figure in perspective, just $24 million had been paid in the whole of 2015 – That represents a 771% increase in ransom payments and only three months had passed. The year of ransomware had barely even begun!

TeslaCrypt was one of the biggest ransomware threats at the start of the year, although the emergence of Locky ransomware in February saw it become an even bigger threat. It soon became the ransomware variant of choice. Locky was used in attacks in 114 countries around the world last year, and cybercriminals continue to tweak it and release new variants. Locky has yet to be cracked by security researchers. Then came Cerber, CryptXXX, Petya (which was defeated in April), and Dogspectus for smartphones, to name just a few.

By the summer, The Guardian newspaper reported that 40% of UK businesses had been attacked with ransomware, although the majority of ransomware attacks were concentrated in the United States. By the autumn, more than 200 ransomware families had been discovered, each containing many variants.

Reports of attacks continued to flood in over the course of the year, with ransomware arguably the biggest cybersecurity threat seen in recent years.

2016 was certainly The Year of Ransomware, but 2017 doesn’t look like it will get any easier for security professionals. In fact, 2017 is likely to be even worse. Some experts have predicted that ransomware revenues will reach $5 billion in 2017. 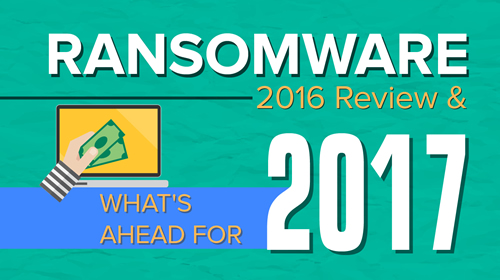