Today, new malware variants are being released at record pace. To block these zero-day malware attacks, an advanced email security solution is required which does not rely on signatures to identify malicious file attachments.

SpamTitan was already a powerful email security solution for SMBs and MSPs serving the SMB market and was capable of blocking sophisticated phishing emails and new malware threats. However, new features have now been added that improve detection rates further still and provide superior protection against zero-day malware and phishing attacks that spoof legitimate domains.

TitanHQ has updated SpamTitan to include a DMARC email authentication feature which is capable of detecting and blocking spoofed emails to better protect users from sophisticated phishing attacks.

To better protect against malware, ransomware, botnets, and zero-day attacks, TitanHQ has incorporated a new Bitdefender-powered sandboxing feature into SpamTitan. Email attachments that pass standard checks are safely detonated in the sandbox and are analyzed for malicious activity. The sandboxing feature provides an additional layer of security and greatly enhances protection against malicious attachments. This feature also helps to ensure that more legitimate emails and attachments are delivered to end users.

To explain how these new features work and the benefits to users, TitanHQ is running a webinar. In the webinar, TitanHQ will cover the new features in detail and will explain how SpamTitan can protect against the full range of email-based threats.

The webinar will last 30 minutes and advance registration is necessary.

You register for the webinar here 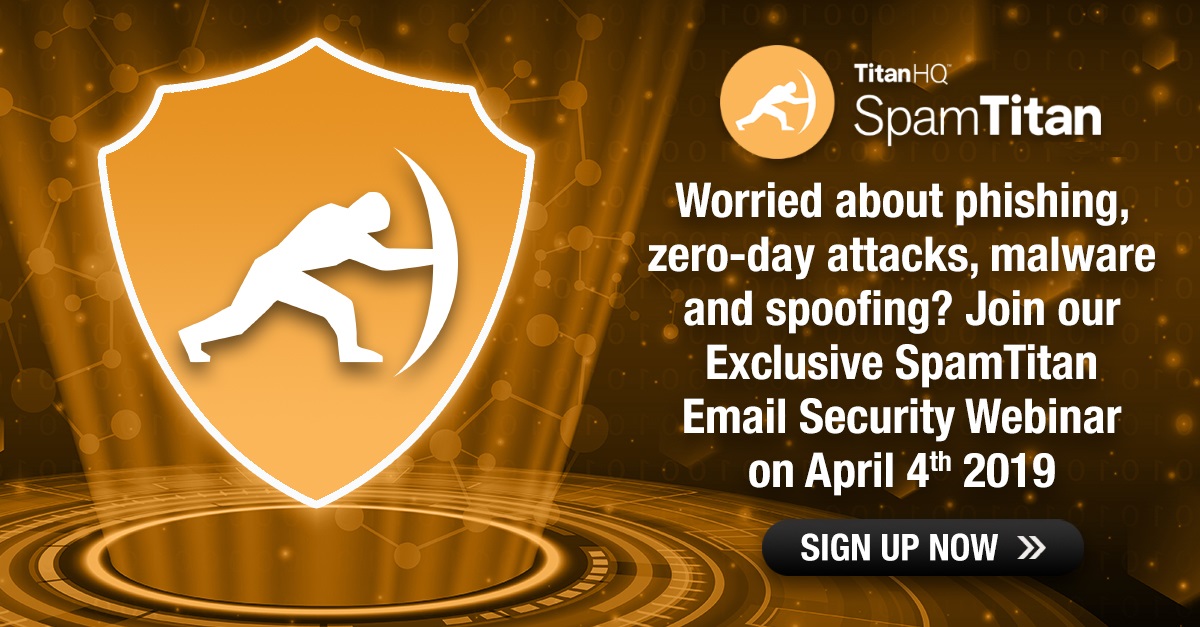 Cybersecurity Protections for SMBs Found to Be Lacking

A new report has confirmed the need for robust, multi-layered cybersecurity protections for SMBs to prevent successful cyberattacks. SMBs are increasingly being targeted by cybercriminals as security is often weak and attacks are easy to pull off.

Cybercriminals often choose the path of least resistance, even though the potential for profit may not be so high. Cyberattacks on SMBs are much easier and hackers are concentrating their efforts on SMB targets. This was clearly demonstrated in the latest cybersecurity report from Beazley Breach Response (BBR) Services.

Massive demands for payment for the keys to unlock encrypted files may not be the norm, but even at the lower end of the spectrum SMBs may struggle to find the money to pay. The ransom demand is also likely to be considerably higher than the cost of cybersecurity protections for SMBs to prevent ransomware attacks.

One of the main ways that hackers gain access to the networks of SMBs is by exploiting flaws in Remote Desktop Protocol. SMBs that leave RDP ports open are at a much higher risk of being attacked. RDP is required by many SMBs because they outsource IT to managed service providers, which need to use RDP to access their systems. In such cases it is essential for default RDP ports to be changed and for very strong passwords to be implemented to reduce the risk of brute force attacks succeeding.

There was also an increase in sextortion scams in 2018. These scams attempt to extort money by threatening to expose victims’ use of adult websites. While these scams usually contain empty threats, they are often successful. In addition to attempting to extort money, the scams are used to install malware or ransomware.  Email attachments are sent which claim to contain videos of the victim accessing adult websites, which the scammers claim to have been recorded using the computer’s webcam. When the files are opened to be checked, malware or ransomware is installed.

2018 also saw a 133% increase in Business Email Compromise attacks. These attacks spoof the email address of a senior executive to make the emails and requests seem more plausible. These scams are usually conducted to obtain sensitive information or to get employees to make fraudulent wire transfers. BEC attacks accounted for 24% of all breaches investigated by BBR Services in 2018.

One of the most important cybersecurity protections for SMBs to implement to prevent these attacks is an advanced email filtering solution – One that is capable of detecting spoofed emails. SpamTitan, TitanHQ’s cloud-based spam filtering solution, has recently been updated to include DMARC authentication to detect email impersonation attacks such as BEC scams. The solution also now includes a new sandboxing feature that allows potentially malicious attachments to be analyzed in detail in the sandbox where no harm can be caused. This helps to identify more malicious attachments and better protect SMBs from zero-day malware and other malicious files.

SpamTitan has long been the go-to solution for SMBs to improve email security and the solution is popular with managed service providers serving the SMB market. SpamTitan is quick and easy to install, simple to use, and provides excellent protection against a wide range of email threats.

To maintain pace and better protect SpamTitan users, two important new features have now been rolled out with the latest release of SpamTitan: Sandboxing and DMARC authentication.

Blocking known threats is one thing, but detecting and blocking brand new threats that evade AV solutions is another matter, yet businesses need protection from these zero-day threats as well. SpamTitan already incorporates a range of mechanisms to detect these new threats but the latest feature takes protection to the next level.

SpamTitan now incorporates a new next-gen sandboxing feature. The Bitfedender-powered sandbox is a virtual environment that is totally separate from other systems. When an email is sent to a SpamTitan user, the message will be subjected to a range of checks to determine whether it is genuine, benign, and should be delivered or if it is malicious and needs to be rejected. If the message contains a suspicious attachment that is not picked up as a threat from those checks, it is sent to the sandbox.

The SpamTitan sandbox service has been designed to appear as a normal endpoint. Malicious files are opened or executed in the sandbox and any malicious code is run as it would on a standard machine. Its actions are logged and subjected to an in-depth analysis, including its self-protection mechanisms and attempts to evade detection. All actions are then assessed by advanced machine learning algorithms and the results of the analysis are then checked against a wide range of online repositories.

Opening potentially malicious files on an endpoint is dangerous, but in the isolated sandbox all risks are eliminated. Once the analysis is complete, which takes just a few minutes, if the file is determined to be benign it will be released and can be delivered to the end user. If it is malicious, the sandbox solution will automatically report the file to Bitdefender’s cloud threat intelligence service. That threat will then be blocked for all SpamTitan users, so the file will not need to be analyzed again.

This new feature greatly increases detection of elusive threats, provides end users with even greater protection, and it also helps to ensure that more genuine messages are delivered.

Email impersonation attacks are a major threat. They abuse trust in a known contact, company, or government organization to fool end users into taking a specific action – disclosing sensitive information, installing malware, or visiting a phishing webpage, for instance.

While SpamTitan already incorporates several mechanisms to identify email impersonation attacks, DMARC authentication has now been added to block even more threats. DMARC is a powerful tool for identifying the true sender of an email to determine if that individual is authorized to use a particular domain.

Detailed checks of the email header are performed and the sender is checked against DMARC records. If the checks are passed, the message can be delivered. If DMARC authentication fails, the message is rejected.

Both of these features have been made available to current and new TitanHQ customers at no extra charge.