Internet filter software for schools has evolved significantly since the passage of the Children´s Internet Protection Act (CIPA) in 2000. The Act stipulated that, in order to qualify for E-Rate discounts, K-12 schools must implement an Internet Safety Policy that includes “a technology protection measure … that protects against access … to visual depictions that are obscene, child pornography or harmful to minors”. The Act also requires that each school´s Internet Safety Policy addresses:

Within two years – according to the U.S. Department of Education, National Center for Educational Statistics [1] – the “technology protection measure” implemented by 96% of schools with Internet access was school Internet filtering software. This was often used, although not required by CIPA, to enforce the “addressable” issues of the Act – resulting in students being unable to access email and chat services; or, in a number of circumstances, educationally important material.

Subsequent state-level legislation has adopted CIPA as its cornerstone and extended the level of prohibited Internet access to any material the state or school considers harmful to minors (rather than just CIPA-mandated “visual depictions”). Twelve states explicitly stipulate school Internet filtering software must be used [2], whereas thirteen states have passed laws specifically relating to filtering, blocking and usage policies in schools that require the implementation of acceptable use policies.

Although the intention of federal and state legislation is undoubtedly virtuous, school Internet filtering software has not been without its critics. At the time CIPA was enacted, Internet filter software for schools consisted of hardware-based agents that were awkward to configure, comparatively expensive, and came with a high maintenance overhead in terms of software updates. They were also not that good at filtering out “visual depictions” or “inappropriate matter”.

A report compiled by the Brennan Center for Justice at the NYU School of Law [3] used the content of forty Internet filtering studies conducted between 2001 and 2006 on order to illustrate how badly school Internet filtering software performed. As well as under-blocking inappropriate content, most over-blocked educationally important material – one study finding the term “safe sex” was blocked between 33% and 91% of the time depending on the configuration of the filter.

Although websites containing educationally important material could be “unblocked” from the school Internet filtering software, this could be a long and arduous procedure due to unblocking decisions having to be made and actioned at district level. In a survey conducted by the American Association of School Libraries in 2012 [4], only 27% of requests to unblock websites were actioned within hours – some students having to wait more than a week before accessing the information they needed.

The consequence of early Internet filter software for schools was to create a “two-tier educational system” in which students with unfiltered home Internet access thrived ahead of students limited to what was accessible in schools. In 2000, only 41.5% of households in the United States had Internet access [5] and often students from households without Internet access look for other ways to go online – “unsupervised and not taught how to navigate the Internet critically, appropriately and safely.” [6]

How the Situation has Evolved in Recent Years 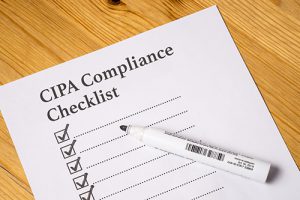 Role-based access controls allow websites to be unblocked at local level without disturbing district level configurations. Time-based controls allow students to access certain online content outside of schools hours, and it is now also possible to configure monitoring and reporting options in order to identify students who might be at risk due to inappropriate or irresponsible online behavior, and to satisfy state regulations allowing parents to dictate their child´s Internet access.

The issue of households with and without Internet access has largely been resolved due to cheaper technology and the growth of personal mobile devices. Although minors are still at risk from navigating the Internet without supervision, the millennial generation is more tech-savvy than its predecessors and generally faster to learn from peers and older siblings – mitigating some of the risk while balancing the opportunities for students to learn.

However, the level of risk has increased in recent years due to online grooming and web-borne threats such as malware, ransomware, social engineering and identity theft – identity theft now having a higher value on the black market than stolen credit card details. The threats from cybercriminals have increased to such a degree, it is now critical educational institutions and libraries implement Internet filter software for schools capable of meeting the challenges of the modern era.

Why SSL Inspection has become a Necessity

At the time CIPA was enacted, only websites that conducted financial transactions, certain email accounts and corporate information systems were encrypted in order to keep conversations secure. Since then there has been a growth in Secure Socket Layer (SSL) encryption to mirror the growth in online banking, online shopping and social media – many social media portals using encryption to protect the privacy of their clients.

Websites owners have also been encouraged to encrypt their online content by Google – the world´s leading search engine rewarding those who do by enhancing their position in search engine results pages. Consequently, more than half the world´s most visited websites are now encrypted. This can be an issue for schools using Internet filter software without SSL inspection, as the software cannot read the encrypted content, finds nothing to contravene user policies, and allows access to the website.

Cybercriminals have not failed to notice that some older school Internet filtering software is incapable of reading encrypted content and used SSL encryption to avoid detection. The scale of the problem is not exactly known, although it was reported in 2016 that one SSL Certification Authority has issued more than 15,000 SSL Certificates for websites with the word “PayPal” in their URL. A random sample found that 96.7% of these websites had been set up for the purpose of executing phishing attacks.[7]

School Internet filtering software with SSL Inspection decrypts, reads and re-encrypts the content of every encrypted web page to ensure the SSL Certificate is genuine, the website is free from malware and ransomware, and complies with the school´s filtering policy. It also helps ensure the contents of communications between the user and website cannot be intercepted and read or forged by third parties.

In addition to providing a balance between protecting children from inappropriate content and allowing access to educational and socially-important material, school Internet filtering software has several other essential features. Network administrators can control the bandwidth used by individual devices to ensure there is adequate access to the Internet for everybody, and prevent illegal downloads.

Downloading copyrighted material from P2P file sharing websites is not only illegal, it provides a back door for cybercriminals to intrude into a school´s network, install malware and gain access to confidential data. Educational institutions are increasingly becoming a target for cybercriminals due to the large databases of personal data they maintain and the opportunity to commit identity fraud. One of the main sources of malware is pirated content from P2P file sharing sites and torrents sites so it is essential for these websites to be blocked.

School Internet filtering software mitigates the risk of unauthorized intrusion and identity theft by using malicious URL detection to prevent users clicking on links that may lead to compromised websites. This also mitigates the risk that users will fall victim to a phishing scam, the school network will be encrypted by ransomware, or that personal devices will be infected when they connect to the network.

WebTitan offers Internet filter software for schools with a choice of deployment options. Districts providing a WAN service to a number of schools will find our Gateway virtual appliance likely to meet their needs, while smaller educational institutions may find our cloud-based school Internet filtering software more suitable. For schools that offer a wireless service, we have WebTitan Cloud for WiFi.

Each of the deployment options takes just minutes to set up and configure via a web-based portal that can be accessed from any Internet-connected device. There are no set-up costs nor hardware to purchase. Our Internet filter software for schools is compatible with every operating system, compliant with all federal and state legislation, and universally scalable to any number of users and WiFi hotspots.

WebTitan has SSL inspection to read the content of encrypted websites with imperceptible latency before allowing or denying access. All software updates and patches are conducted by our servers to remove the burden from network administrators, and we provide industry-leading technical and customer support should you encounter any issues with our Internet filter software for schools.

Try Our Internet Filter Software for Schools for Free

If your educational institution is debating the merits of Internet filter software for schools – or you have an existing legacy system dating back to the passage of CIPA – you are invited to contact us and request a free trial of our school Internet filtering software. After discussing your requirements to determine most suitable WebTitan option for your needs, we will guide you through the deployment and configuration of our Internet filter software for schools so you are up and running at once.

Our free trial not only gives you the opportunity to evaluate the merits of WebTitan in the school environment, but also provides sufficient time to find the optimal filter settings for your specific circumstances in order to provide your students with a balance between protection from inappropriate content and allowing access to educational and socially-important material. Speak with us today, and you could be protecting your students and your network within thirty minutes.

Summary of Features and Benefits of School Internet Filtering Software

Can the web filter be temporarily bypassed?

WebTitan supports the use of cloud keys, which can be provided by the system administrator to individuals access to content that would normally be blocked. Cloud keys are valid for a set time period, after which, standard filtering controls will apply.

Will students be able to bypass the web filtering controls?

The most common way for web filters to be bypassed is to change the DNS settings to point to a DNS server without a filter, to use an anonymizer service or proxy, or a VPN solution. WebTitan can be configured to block the latter two, and IT teams should lock down the DNS settings so they cannot be changed.

Will the filter work on school-issued laptops when taken home by students?

WebTitan is a cloud-based web filter that allows filtering controls to be applied to protect users on and off the network. It doesn’t matter where a computer is used to access the internet – plugged into a wired network, Internet access through the school Wi-Fi network, or in students’ homes or public Wi-Fi networks – the filter will be active.

How does WebTitan block malware downloads?

The administrator can configure WebTitan to block downloads of specific files associated with malware - .exe, .bat, .scr, .js, .zip, .msi, etc. WebTitan will also block access to the types of websites where malware is usually hosted, and real-time protection is provided by feeds that constantly update the solution with lists of known malicious websites. Antivirus scans are also conducted.

How can I control bandwidth use?

The easiest way to control bandwidth use is to apply time-based filtering controls for different user groups. The IT team will be aware of the times when bandwidth use is heavy, and more stringent restrictions can then be configured at those times – such as restricting video streaming and other bandwidth heavy activities.

[5] U.S. Department of Commerce, Economics and Statistics Administration, “Home Computers and Internet Use in the United States”: August 2000 [PDF]